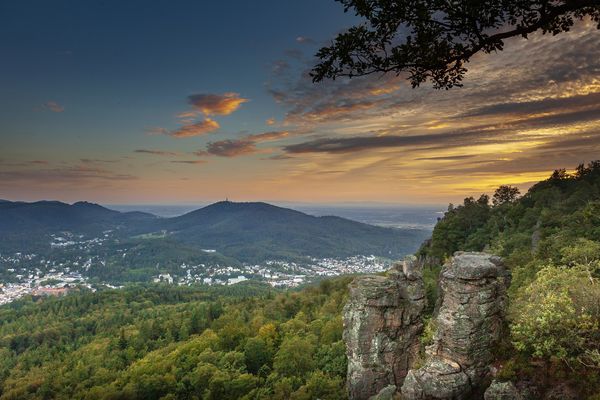 Starting point of the tour

Destination of the tour

The starting point of the tour is the chic Kurhaus with its famous Casino Baden-Baden. Along the charming Kurhaus colonnades, the tour continues to Leopoldsplatz in the heart of Baden-Baden's old town. With its narrow alleys, historically impressive buildings, old cobblestones and splashing fountains, you will discover everything that makes up Baden-Baden's townscape.

Continuing straight ahead, you will cross the shopping boulevard of the Sophienstraße, inviting fashion lovers and trendsetters to take an exclusive stroll in one of the most beautiful streets in the centre of Baden-Baden.

Then turn left to the market square with its collegiate church, past the historical relics of the Roman bathing quarter. From here, the steps of the Schlossstaffeln (Castle's steps) climb up to the terrace of the New Castle on the so picturesque Florentiner Hill. Above the Monastery of the Holy Sepulchre you can enjoy one of the most spectacular views of the smallest cosmopolitan city. Baden-Baden has already shown itself from its best side and presented itself in all imaginable facets.

Afterwards, you will go through the extensive park high up on the Hungerberg, past the St. Bernharduskapelle (St. Bernard's Chapel) to the mighty walls of the ruins of the Old Castle.

The impressive ruins of Hohenbaden Castle lie like an eagle's nest on the western edge of the Battert Rock and offer a majestic view of the town and its countryside. The margraves of Baden once resided here for a long time. Later, poets, thinkers and painters came, who were inspired by the now picturesque ruins and the lush nature in the 19th century. Thus, the romantically situated complex was secured and developed for tourism as early as the 1820s – Baden-Baden's entry as an exceptional recreational destination of European standing. Hiking and walking – both have a great tradition in Baden-Baden to this day.

The Fidelitas Restaurant, which belongs to the complex, offers a wonderfully elegant place to stop for a bite to eat in a special ambience.

From here you continue along the Battert Rockj, a popular climbing and nature reserve with rock towers up to 60 metres high. Here, you will be attracted by numerous stone viewing platforms with unbelievable panoramic views over the city and the entire Rhine valley, all the way down to deep into France. The so-called "Ritterplatte" at 488 metres above sea level is one of them.

Now, after a detour to the Devil's Pulpit with a heavenly view, you continue down to the valley station of the Merkur Funicular Railway. Although the first stage ends here, you should not miss a leisurely ascent to the summit with the funicular railway built in 1913.

The cable car takes you 370 metres high to the top of Baden-Baden's local mountain, the Mercury: probably the most beautiful view sp far with a fine stop-off point, the Merkurstüble, to round off the hike well deserved.