The centre of the spa activities ranged from the market square to what is today the Römerplatz. 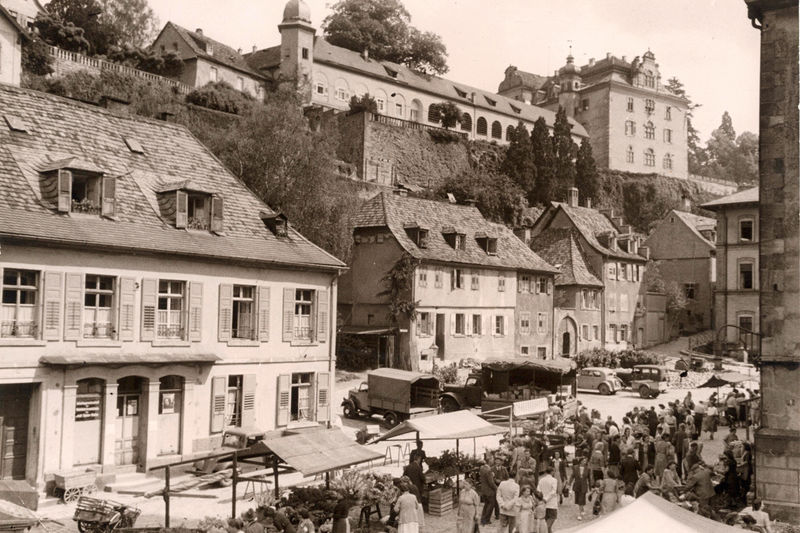 At the end of the 1st century AD, the Romans began to build baths on the plateau close to the hot springs. The centre of the spa activities ranged from the market square to what is today the Römerplatz.

In 1847, four baths lined with marble and greenish granite were uncovered on the north side of the Stiftskirche. The extremely high-quality interior of the thermal spa, combined with an inscription by the Roman Emperor Caracalla (188 –217) found there, resulted in the name of the "Kaiserbäder" ("Imperial Baths"). The layout of the quot;Kaiserbäder" is outlined in colour in the paving of the market square.

The market square was for a long time home to the town's weekly markets and the focus of its urban life.

There have been buildings on the northern and eastern part of the square since the Middle Ages. Right at the foot of the Florentinerberg was the Höllengasse, which was completely built over. The boundary towards the market square consisted of the Gasthaus Rose, which used to stand in the middle of today's square. Since the Middle Ages, the core of the bathing area has been the eastern part of the square as far as the Monastery of the Holy Grave. This was where the outdoor baths were at the exit of the thermal spas, which locals and the poor were able to use free of charge, as well as several bathing hostels for outside guests where baths were given. Following extensive destruction in the city fire of 1689, the land lay fallow for almost a century. However, a complete refurbishment of the area around the thermal spas became necessary with the upsurge in bathing tourism in the early 19th century. Director of construction Friedrich Weinbrenner (1766 – 1826) created a classicist building group with the Hall of Antiques, a steam bath and the Pump Room; they later had to give way to the Old Steam Bath and the Friedrichsbad.

The generous uncovered area of the market square was created over the course of the 20th century. The Gasthaus Rose was demolished in 1937. By 1970, all of the houses on the Höllengasse had been removed in order to protect the thermal springs. A new green area was created along the old Höllengasse for the Horticultural Show of 1981.